Like a painting but real… shot at the ‘jump-up” just south of the NOC.

Whenever I’m going through a tough time, I run for the hills. Literally. Most every major life decision I’ve made happened over the course of a long walk. Nearly three years ago, going through a divorce, I headed off to the Appalachian Trail feeling the need to walk off some heartache.

Spring hiking in the North Carolina mountains has been a favorite pilgrimage of mine for over two decades. However, I only started picking away at the Appalachian Trail in 2010. A friend joined me for the first section from Highway 64 to the Nantahala Outdoor Center (NOC) then I hiked solo from Standing Indian to Highway 64 later that summer.

The driver dropped us off on the side of the road next to the green and white AT sign. Stepping off the pavement and hiking uphill (it always starts uphill…) I immediately began to unwind and establish my pace. Then realized I needed to pee and had forgotten my hiking poles. Nice.

Two days later the forgotten poles left my knee in excruciating pain. However, in some sick way, that’s exactly the distraction I needed. I had beautiful woods, views, and if my mind wandered too far toward past hurts, that knee brought me right back to the present. Yes, I believe in making the best of almost anything.

It took an extra day for us to make it to the NOC and I’ve never been so happy to finish a packing trip. An MRI and six weeks of recovery later, I was headed back. To read about the next section I hiked, read my post Solo on the Appalachian Trail.

Here are a few images from the Highway 64 to NOC section, which was incredibly lovely. Sadly, it might be a while before I get back on the AT, but I look forward to packing near my new home in Salt Lake City or in California with my sister. 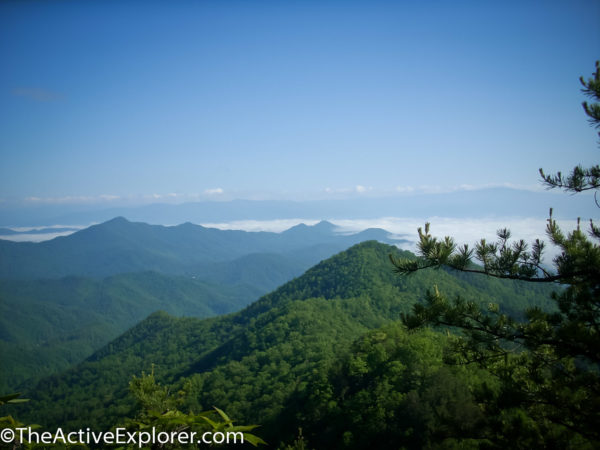 Siler Bald – Off in the distance was a very “high” dude laying in the grass playing a homemade banjo.

View from the Wayah Fire Tower

I never get tired of the spring flowers along the trail. Another fire tower which I refused to climb.

The long green tunnel. I had to share this photo even though I’m pretty sure I’ve used it before. It was a favorite from this hike.

You have to appreciate the warning at the end of long day’s hike. I love food ON the trail….