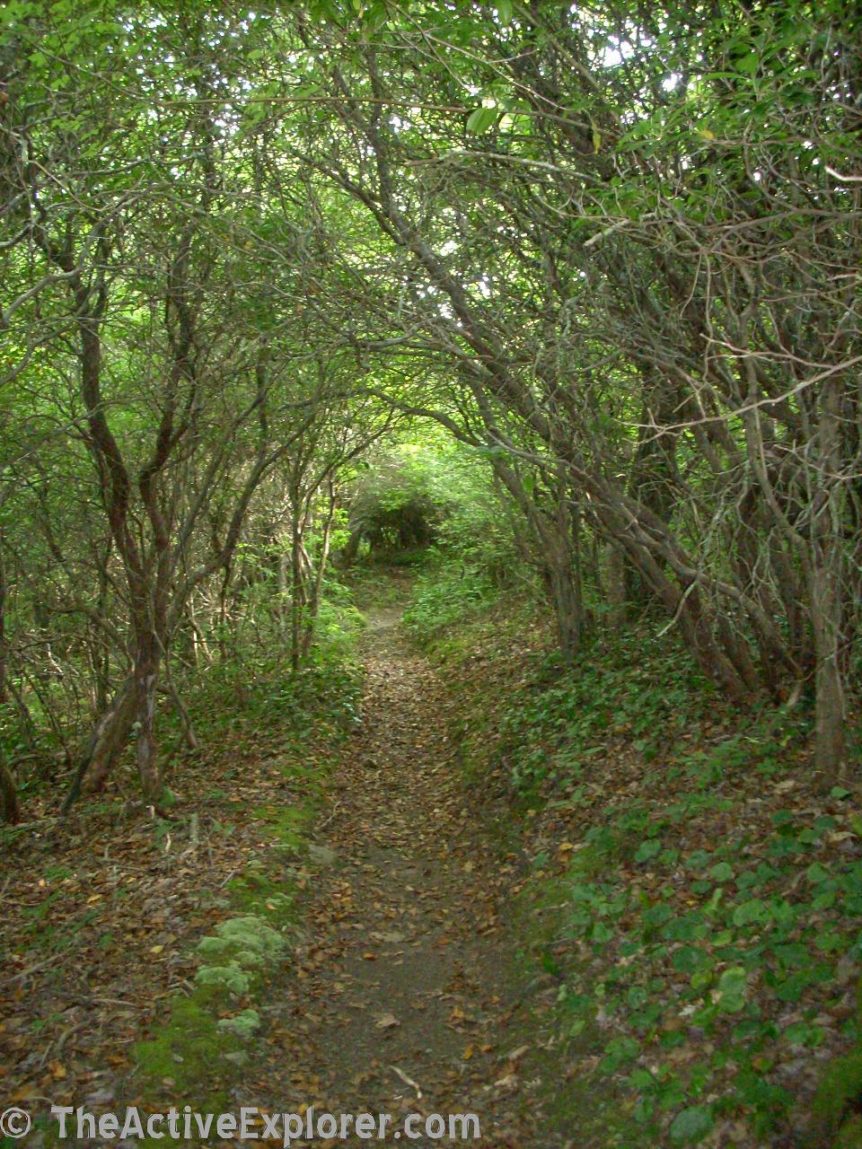 The sound of gravel under the tires of the hiker shuttle faded.  I was alone at the Deep Gap trailhead to begin a solo hike on the Appalachian Trail in North Carolina. Instead of silence, I heard the low drone of bees visiting blooms around the trailhead.  One signpost indicated the trail leading south and another to the north.  The scent found in heavily forested areas hung in the air, a mix of damp dirt, trees and flowers.  The shuttle would meet me in three days where the trail meets Highway 64 outside Franklin.  Adjusting my pack one last time, I started up the steep trail to the north.

Winding uphill the trail entered dense forest, the rhododendrons reached across from either side leaving just enough room for a tall hiker.  My mom calls these “rhododendron tunnels” and the name fits.  The drone of bees was louder and pink and white petals blanketed the trail.  Bear scat also dotted the trail.  Do they make a point of visiting the trail to relieve themselves, I wondered, and mentally reviewed the basics of handling a bear encounter.

For years, I had hesitated to backpack solo.  Occasionally, I’d seen other women alone, I wasn’t sure how I would react to sleeping alone in the woods.  Hearing that the Appalachian Trail is both heavily traveled, and well supported by shelters, gave me the confidence to try my first solo trip.

The Appalachian Trail (AT), the brainchild of Benton Mackaye, was completed in 1937, and is now a National Scenic Trail winding from Springer Mountain, GA to Katahdin, Maine, a total of 2,178 miles.  I have decided to section hike the trail each year until I have hiked it all.

My leg muscles burned as I pushed myself up the first steep climb. The faint sound of bells alerted me, What on Earth?  Sensing movement ahead, I stopped and listened, hearing nothing more.  Thinking about the bear scat on the trail, I continued.   Again, the sound just re-entered my consciousness and I saw a large figure ahead.  My heart rate increased, I held my breath, and questioned my judgment for being out there alone.  Instead of the bear I was afraid of encountering, I met a husky hiker wearing bear bells.  With a warm friendly smile, he huffed an out-of-breath “hello” as I passed him by and I reminded myself to breathe.

Oddly, the extended quiet of the trail caused my mind to fill with music.  Unfortunately, it was the same music for days.  Over and over, I heard the chorus of Pearl Jam’s rendition of Crazy Mary.  I hummed it, sang it and tried to forget it without success. 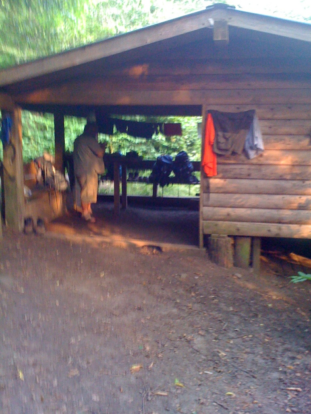 My shelter for the first night

Sooner than expected, I arrived at the shelter for the first night.  With three sides and a floor, shelters along the AT provide a convenient alternative to pitching a tent.  Built in 1958, the shelter I arrived at had fallen into disrepair with a two-foot hole in the floor (in real estate it’s called “ventilation”).  I considered pitching my tent, rather than sleep in the questionable structure.  Fortunately, a few hundred feet further, a newer shelter stood with a cooking table, benches and a privy (an open-air potty with three walls and a seat).  Located in a clearing surrounded by yet more rhododendrons, this shelter invited backpackers to relax after a long day.  Hours later, Bell Man and nine others arrived pitching tents, hammocks and filling both shelters.

On the AT, you might hike all day without seeing another person, but at night, backpackers congregate near shelters and share the ups and downs of their day with each other.  Colorful characters populate the AT with trail-names (a name used only on the trail often given to the hiker by others) like Agent Orange or The Pretty One.  Other hikers are just different.  One night a particularly compulsive person lined up all of my food and cooking equipment with my sleeping bag.  Evenings are a chance to learn tips from other backpackers on products, packing, and recipes.  I learned that Bell Man saw a bear shortly after I passed.

Hiking alone forces conversations with yourself.  At first, it’s unnerving, but after a while, ideas and feelings you’ve neglected, rise to the surface to be heard.  In the days that followed, I had many conversations with myself regarding adventure travel, confidence, marriage, business, and goals.

In spite of a tough scramble up Mt. Albert, I again hiked faster than expected and arrived at the shelter in the early afternoon.  It was in good shape, but far off the trail, lonely, and the privy was gross.  I decided to push on to the next shelter.

My decision to continue had me out on the trail when a huge thunderstorm moved into the area.  Initially, I was upset at getting soaked, but then I realized how much I enjoy walking in the rain.  I’m certain it made me smell better, and the steady flow of water on my skin felt refreshing after the summer heat.

That evening I met two more women who were also soaked.  They were backpacking for the first time and jumped right into a four-day trip with borrowed gear.  I was impressed.  It was just the three of us in the shelter for the rest of the rainy night.  We enjoyed getting to know each other over dinner, surrounded by our drippy clothes, which hung from nails in the rafters.

All that night I heard strange noises in the woods.  Limbs broke due to the heavy rain, and other sounds I never could figure out.  I knew I was not alone, but in the company of an entire ecosystem of creatures.   I heard them going about their natural routines, which was a bit disconcerting in the dark. Lying awake for hours, I wished away the night.

As daylight approached, the birds woke me first.  Quietly I moved to the picnic table to avoid waking my shelter mates and fixed some instant coffee.  The robins were classic early birds pulling worms out of the dirt next to the stream.  The last of the rain fell out of the trees.  Some of the noises from overnight were still there, but weren’t as frightening in the warm morning light.  Savoring the sights, smells and sounds of my last morning on the trail, I felt sad my trip would soon end. 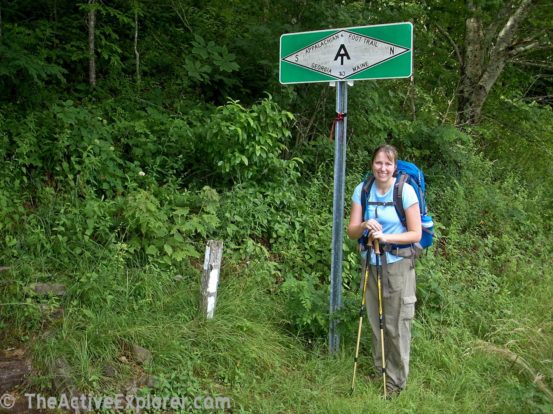 I hiked with my new friends off and on all day, each at our own pace.  Approaching the end of my trail, the sound of cars and truck brakes replaced the drone of the bees and soon the highway came into sight.  A busload of Boy Scouts donned their backpacks and headed up the next section of the trail northbound. The hiker shuttle waited patiently.  I returned to the world of people, phones, work and family with a cleared head, worn-out body, and joy that I took the plunge into backpacking solo.

To view all of my backpacking/hiking posts click HERE.