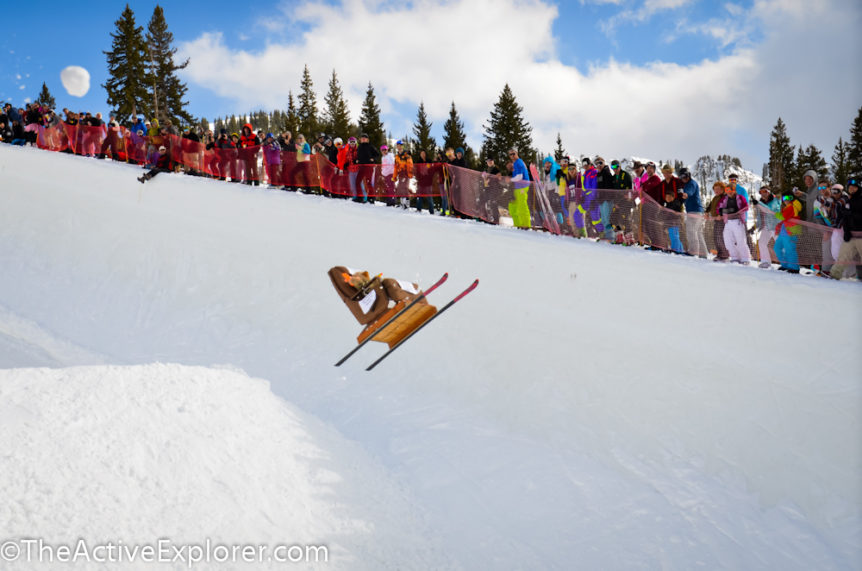 The Barcalounger catches air at the Dummy Downhill

As a kid, I was the wallflower sitting in the corner of the classroom. Well, for the brief period of time I wasn’t living on a boat being home schooled…. Okay, on to my point, I’m not naturally outgoing, I have to work at it. That said, few things make me more uncomfortable than dressing up in a costume. Seriously, the bulk of my wardrobe is beige and black. I try to disappear, not attract attention. As a blogger I really struggle with even having my picture taken.

On to the fun stuff. If you’ve been following along for the last several months, you may recall that Brighton Ski Resort, just outside of Salt Lake City, Utah, hosted me for ski lessons in January. I made some friends there and joined the ski school crew at their Star Wars themed end-of-year party dressed as….wait for it…Princess Leia. Well, at least it was a neutral color and not too daring, so I didn’t hyperventilate or anything. My Princess Leia costume for the Ski School party.

Then came the invite to ski on Brighton’s closing day in costume as well. Oh my… I hadn’t skied since January and was reasonably sure I’d bust my butt. I had visions of making a fool of myself not only as a newb skier, but in an attention getting costume as well. Cue the insomnia. A dress was out as it would likely result in a tragic wreck. Off shopping I went.

Walking into Decades, a downtown Salt Lake vintage clothing shop, I was completely overwhelmed by my choices. But the options narrowed fast when price and ease of movement were factored in. Eventually I selected an Asian inspired piece I could wear over my thermal layers. It was daring and I was just a little freaked at the idea of skiing in front of tons of people in the outfit. I had visions of being the only person out there dressed like a goof.

Closing day arrived and I met up with my friend Keith at the resort. He had on a Kir Kanos costume reused from the Star Wars party. If there ever was a trip hazard, it was his getup. It was a full-length red satin robe with a hood. But he was braver and way more skilled than me and had no trouble.

Walking out on the snow, I noticed a clown, wolf, a few bikini clad ski bunnies, and a thrift-shop onesie (yes, I just went there). I fit right in with the rest of folks out having a lighthearted time on the slopes.

It took all my nerve to head to the slopes in this costume. In the end, I had nothing to worry about. Yes, I wore a helmet too…

My first run made me think I should stick to hiking, but once I warmed up and gathered my confidence, I relaxed and had a fantastic time. It had snowed the day before and the skiing was sweet. Admittedly, in usual form I completely ate it once. Pass my skies please…. More leg bruises and no miniskirts for another few weeks.

Late in the day, the crowds migrated toward the half-pipe to watch the Dummy Downhill, where homemade dummies mounted on sleds are launched down the pipe to see how far they can make it before smashing into smithereens. Each must weigh 50 pounds or less and contain no pyrotechnics. The crowd cheered and pelted each of the contraptions with snowballs as they slid their way toward an unsure fate. The winner was a Barcalounger piloted by a Teddy bear.

One of these caught air and the other failed to launch.

Watch out for the snowballs!

Winners were announced at a BBQ following the antics on the pipe and most folks were feeling no pain as the party continued off the slope. I opted to tap-out and find warmer clothes. My slinky China Girl ski-gear wasn’t keeping up with the quickly dropping temperatures.

Today, I’m nursing a wicked cold that I hope to clear before I hike Arches National Park this weekend – in neutral, nondescript clothes.

Here are a few more shots from the day and a video I found on YouTube… Enjoy! Costume or not, nothing beats a pretty day on the slopes!