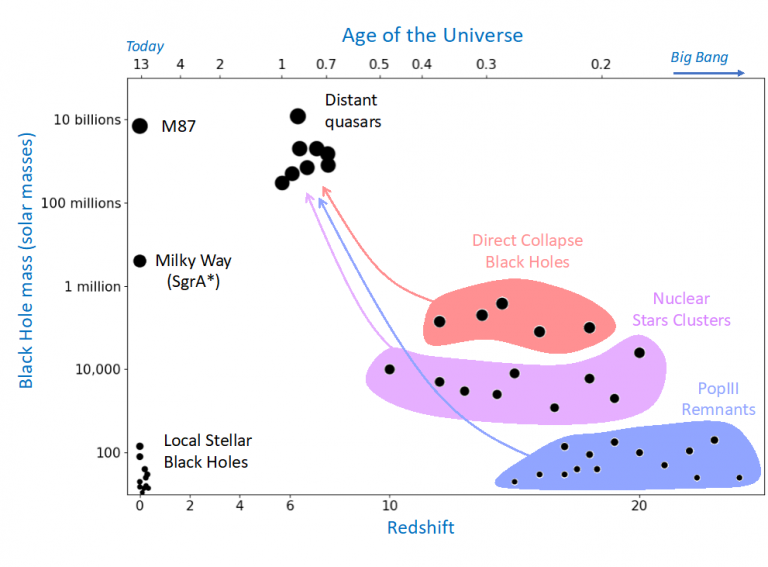 A mystery that has puzzled researchers since the dawn of astronomy remains the notion that most if not all galaxies host a supermassive black hole at its core. Even from the early stages of galactic formations, a large black hole always seems present, and now with the advent of the James Webb Space Telescope, astronomers finally believe that some answers to these questions may reveal themselves as they attempt to unravel this cosmic mystery.

Roberto Maiolino, professor of experimental astrophysics and the director of the Kavli Institute for Cosmology a the University of Cambridge eloquently summarizes the monumental task, “One of the most exciting areas of discovery that Webb is about to open is the search for primeval black holes in the early universe. These are the seeds of the much more massive black holes that astronomers have found in galactic nuclei. Most (probably all) galaxies host black holes at their centers, with masses ranging from millions to billions of times the mass of our Sun. These supermassive black holes have grown to be so large both by gobbling matter around them and also through the merging of smaller black holes.

“An intriguing recent finding has been the discovery of hyper-massive black holes, with masses of several billion solar masses, already in place when the universe was only about 700 million years old, a small fraction of its current age of 13.8 billion years. This is a puzzling result, as at such early epochs there is not enough time to grow such hyper-massive black holes, according to standard theories. Some scenarios have been proposed to solve this conundrum. One possibility is that black holes, resulting from the death of the very first generation of stars in the early universe, have accreted material at exceptionally high rates. Another scenario is that primeval, pristine gas clouds, not yet enriched by chemical elements heavier than helium, could directly collapse to form a black hole with a mass of a few hundred thousand solar masses, and subsequently accrete matter to evolve into the hyper-massive black holes observed at later epochs. Finally, dense, nuclear star clusters at the centers of baby galaxies may have produced intermediate mass black hole seeds, via stellar collisions or merging of stellar-mass black holes, and then become much more massive via accretion.

“Webb is about to open a completely new discovery space in this area. It is possible that the first black hole seeds originally formed in the ‘baby universe,’ within just a few million years after the big bang. Webb is the perfect ‘time machine’ to learn about these primeval objects. Its exceptional sensitivity makes Webb capable of detecting extremely distant galaxies, and because of the time required for the light emitted by the galaxies to travel to us, we will see them as they were in the remote past.

“Webb’s NIRSpec instrument is particularly well suited to identify primeval black hole seeds. My colleagues in the NIRSpec Instrument Science Team and I will be searching for their signatures during ‘active’ phases, when they are voraciously gobbling matter and growing rapidly. In these phases the material surrounding them becomes extremely hot and luminous and ionizes the atoms in their surroundings and in their host galaxies. NIRSpec will disperse the light from these systems into spectra, or ‘rainbows.’ The rainbow of active black hole seeds will be characterised by specific ‘fingerprints,’ features of highly ionized atoms. NIRSpec will also measure the velocity of the gas orbiting in the vicinity of these primeval black holes. Smaller black holes will be characterized by lower orbital velocities. Black hole seeds formed in pristine clouds will be identified by the absence of features associated with any element heavier than helium.

While sounding like something out of a science fiction story, the fact that the greatest minds on Earth are studying black holes with equipment designed specifically to observe and analyze them is quite the testament to our civilization. Let’s keep this party going, eh?