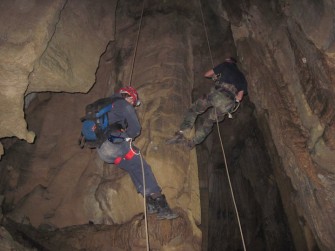 Enjoy this post on my favorite adventure sport, caving….

Flat on my belly, I was laying in an underground puddle trying to push myself under a collection of stalactites without causing damage.  The icy water soaked my coveralls and made the going easier. I think the saying is, “slippery when wet.”  Using my toes to propel me, I slid under the formations and down a short decline.  I love the smell of cave mud, and I was covered in it from head to toe while I looked for a room full of nineteenth century graffiti that I’d heard about.  Six of us rappelled into the cave equipped with modern gear, LED lights and a halfway decent map, but the adventurers who wrote on these walls in the 1800’s had none of this equipment.

After thirty minutes or so we found one the graffiti rooms and written on the walls in soot and perfect penmanship, was my maiden name, Foster.  I wondered if some distant relative was as enamored by caves back then as I am today.  Farther in, we found more writing and again the Foster name.  Mom and Dad should have joined me for this trip rather than staying behind in camp!

This caving trip is part of an annual tradition for many southeastern cavers; a marathon weekend of caving called the TAG Fall Cave-In.  For thirty-three years, cavers have converged near the intersection of Tennessee, Alabama and Georgia (TAG), each Columbus Day weekend to cave, socialize and party together.  A two-story bonfire lit by a flaming arrow is the highlight of Saturday night festivities.

The Dogwood City Grotto sponsors, organizes and hosts the Cave-In, a monumental task by any standard.  While providing a good time for over a thousand cavers, they also promote conservation by supporting two worthy groups.  A prerequisite to attending the TAG Fall Cave-In is membership in the National Speleological Society (NSS) an organization devoted to cave conservation.  Another organization, the Southeastern Cave Conservancy, Inc. (SCCi), has made it possible for cavers to visit many caves that would otherwise be inaccessible. They have also gated and restricted access to caves that have bat colonies, are highly delicate or had a history of vandalism.  Throughout the weekend, raffles and events promote SCCi membership and fundraising to help them continue their work.

In Signal Light Cave, we returned to the entrance pit of and ascended to the surface.  Rappelling into caves is easy since gravity is on your side.  Ascending out requires more work and the assistance of mechanical ascenders or rarely, prusik knots.  Either way its work, and I was proud of my son and his friend who rappelled and ascended for the first time.  They did a great job!

Back at camp, I grabbed a Smithwick’s Irish Ale and nursed a few new bruises and scrapes by the campfire.  I tell my kids, “if you’re bruised and bleeding a little, you must have had a lot of fun.”   We had a lot fun, but it’s important to add that cave exploration is important because people need to know what needs protecting.  To the non-caving public, caves are out of sight and out of mind, but they are home to creatures that cannot live anywhere else and many waterways flow through them as well.  Events such as the TAG Fall Cave-In, while fun, also bring to light how important it is to protect our dark caves. 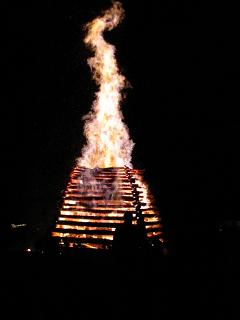 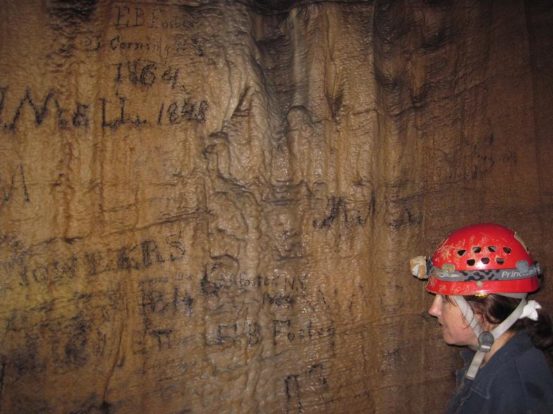