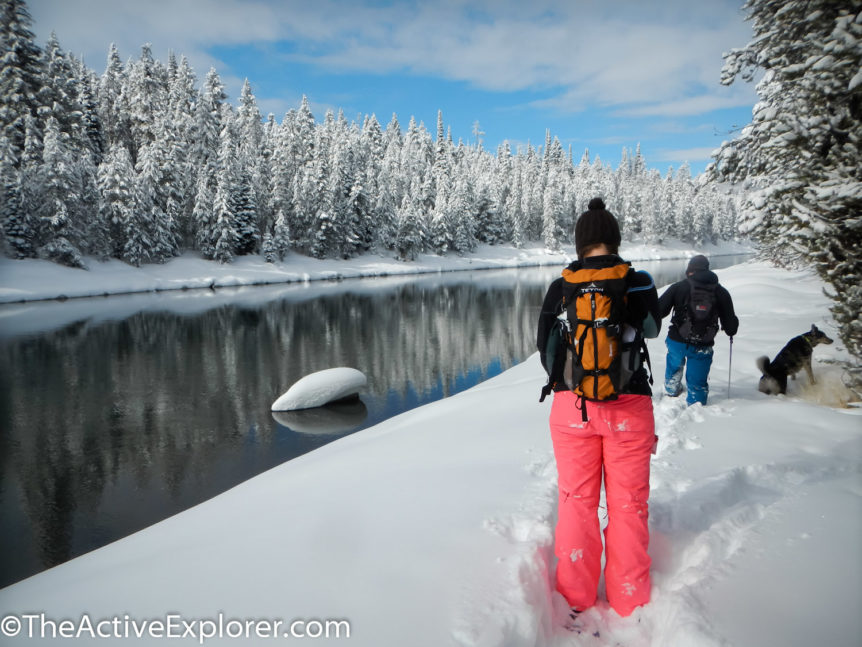 Heather, Matt and Sydney leading the way through the snow.

This post is both an account of our snowshoe trek along the North Fork of the Snake River and a preliminary review of Easton Mountain Products’ Woman’s Hike snowshoes.

Falling face first into the snow, I guess I could have benefited from a pair of poles. Instead, I laughed it off and struggled to get my snowshoe-clad feet back under my legs so I could stand. I was snowshoeing  along Idaho’s North Fork of the Snake River, one of several winter-sport firsts for me this year.

I’d been curious about snowshoeing ever since hiking in Rocky Mountain National Park where small reflective tags mark winter trails high up on the trees. The thought of the area covered in deep snow intrigued me. I liked the thought of taking hiking into the winter.

More recently, I started to research and try-on snowshoes at the Outdoor Retailer Winter Market (ORWM) in Salt Lake City, including a pair made by Easton.

When I received an invitation to join a group of outdoor bloggers in Idaho as guests of Geigerrig , the makers of hydration systems “that don’t suck”, I was thrilled! Activities on the agenda included snowshoeing, skiing and snowmobiling. At last, I had a chance to snowshoe! Additionally, Easton Mountain Products provided us with both Men’s and Women’s Hike snowshoes to demo.

We departed Salt Lake into a substantial snowstorm. The drive was slippery and slow so we had to scrap plans to ski at Grand Targhee on the way to Island Park, Idaho. It’s hard to believe this is a major highway. We were in blowing snow for the whole drive.

Finally, we arrived in Island Park, to a cabin surrounded by deep snow. The cabin, located near Yellowstone National Park, was outfitted with everything we could possibly need. Like Goldilocks, I wandered from room to room trying to pick from over a dozen beds. It was stunning! I could have spent the entire time holed up in the cabin and been perfectly happy, but we were in the heart of paradise, so that wasn’t going to happen.

This is our cabin in Island Park, ID, called the Summers Chalet

After pounding a pile of whole-grain banana pancakes the next morning, I headed off to snowshoe with Matt Gunderson, our host from Geigerrig, and Heather Balogh, while everyone else went snowmobiling. We also dog-napped Kristie Salzmann’s dog, Sydney, for extra company.

On the way to the trail, we spotted a pair of moose wading in the river. The truck had barely stopped before both Heather and I bailed out, cameras in hand. Crawling up a snow bank, we shot image after image and some video too.

Moose in the North Fork River

I already examined the Easton snowshoes at the ORWM, so I understood the benefits of their unique shape and the design of their binding. I had expected to feel like I had a couple of boards attached to my feet, but it wasn’t like that at all. I could still move my foot in a fairly normal motion. I wore the only boots I had, hiking boots, which worked out fine with the shoes.

Walking through the packed snow from the truck wasn’t bad, but once we entered the deep powder, I had to get used to the feel of things. One foot would find a hole in the snow causing me to topple over a few times, as did Matt. It didn’t take me long though and I got my snow legs.

We took turns breaking trail through the deep powder at first. When it was my turn I had a rude surprise, it was a whole lot harder than following! I borrowed Heather’s poles, which made it a little easier, but I still felt I was missing something. She taught me to take smaller steps and pause halfway through each step. That made a difference, but I was still slow. In the end, Matt broke trail for most of the three-plus hours that we waded through thigh-deep powder.

On the trail with Sydney. Photo by Heather Balogh.

Throughout our trek, the views were unreal. The river, sun reflecting off the sparkling snow, a few ducks and a shy kingfisher flew by (if you’ve ever tried to photograph a kingfisher you understand what I mean). We saw a large deer on the opposite bank right before turning around. It wasn’t always easy going, at one point, we had to crawl under a downed tree, more fun I say!

Pano view of the North Fork. That’s Matt and Syd in the distance.

Sydney, figured out that he could have an easier time if he hitched a ride by placing his front paws on the back of someone’s snowshoes, usually Matt’s. That made hiking a lot tougher on his chosen victim. We dubbed his clever move “getting Sydneyed”

What took us hours to plow through on the way in, only took 45 minutes to walk on the way out, because the snow was already packed.

I’m sure I burned about 5,000 calories during our hike and I was about ready to start chewing on tree bark by the time we made it back to the cabin. Chicken quesadillas never tasted so good!

After lunch we went out on the snowmobiles, a near-miss adventure, which I look forward to sharing soon,…stay tuned for that one. Let’s just say I will NEVER head out in the backcountry without all my survival gear again.

I had spent more than four hours hiking through deep powder in the Easton snowshoes without any hotspots or discomfort. The bindings stayed snug and were very easy to put on and take off. I have no way to compare them to other shoes, so I plan to test them again with a more experienced snowshoer, then we will give you a comprehensive review of both the women’s and men’s shoe. I can say that my first impression was positive.

Here are the qualities I noticed so far: Looking back at the trail we blazed.

Heather and I on the trail.