“Fire, fire, fire…,” chants the crowd, as a longhaired man wearing bat-print pajama bottoms launches a flaming arrow into the 20-foot tall bonfire. It lights with a loud ka-thump! About then, another lovely fellow wearing a red ball gown and blond wig allows me to take some glamour-shots of him before moving on into the revelry that lasts into the morning hours. And so ends another TAG Fall Cave-In. 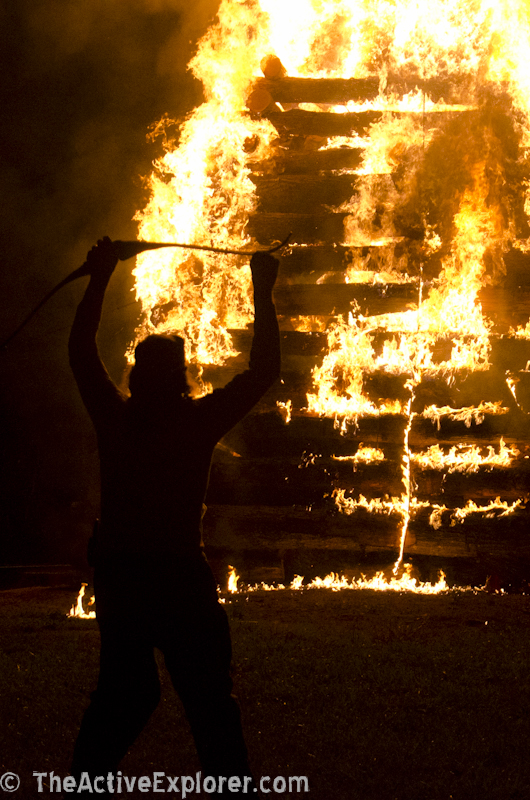 The TAG Fall Cave-In derives its name from the region where Tennessee, Alabama and Georgia converge in the southeastern United States. The area is known for limestone karst formations and numerous caves. Each fall for the last 34 years, the event has drawn cavers from across the country for a long weekend of caving and socializing. Outfitters line “Vendor’s Row” offering rappelling gear, artwork and food. Among them is a modest tent manned by the Southeastern Cave Conservancy, Inc. (SCCi).

In the caving community, the TAG Fall-In is recognized as a great party, but its attendees are also very generous. At the 2009 event, cavers donated $41,000 to the SCCi during the four-day event, not bad for just more than a 1000 muddy, drinking, hot-tub-dipping people who crawled out from under a rock.

“…SCCi is basically the only organization I’m willing to give my money to anymore,” is something I have heard repeatedly around the TAG campfire. What drives (notoriously cheap) cavers to give so generously? Neither caves, nor bats, get much recognition or help from other charities, yet cavers see the effects of pollution and vandalism inside the caves. But the level of commitment TAG cavers show SCCi is still extraordinary. During the 2010 TAG Fall Cave-In, I made it my mission to understand the synergy between them. 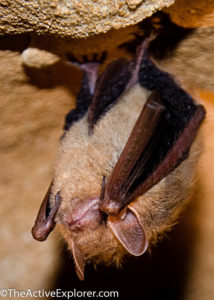 Why are caves so important? Caves are home to many creatures, some endangered, such as salamanders, blind fish, and bats. A little brown bat can eat up to 1,000 mosquito-sized insects per hour, protecting crops and making life more comfortable for all of us. Furthermore, according to Environmental Health News, “ … nearly one-third of the drinking water supplies in the United States come from underground streams and springs originating inside caves or passing through them.” Pollution in caves contaminates the underground streams and rivers that ultimately feed our water supply. Sadly, people who don’t understand or respect caves use them as dumping grounds for trash, and even sewage, poisoning the fragile ecosystem. Worse yet, vandals often damage delicate cave formations shaped over thousands of years, and disturb or kill wildlife. Yet, in spite of their benefit to society, caves receive little protection.

The SCCi’s innovative model of cave conservation involves acquiring threatened caves through lease, purchase or donation, then managing them to protect both the caves and wildlife. The SCCi currently owns or leases 27 preserves containing 185 caves in six southeastern states.

Managing a hole in the ground may sound like a simple task, but it’s not. Vandalism is a constant concern and gates are typically not practical. Like buildings, abandoned caves attract mischief, so the SCCi encourages responsible, recreational caving. To do this, SCCi provides parking areas, surveys and maps the caves, and publishes management plans. The cavers’ presence is a little like having a neighborhood watch on site. Each preserve has a property manager who is highly familiar with its caves and who serves as a contact person for access. They also organize groups of volunteers to remove trash and graffiti as needed. 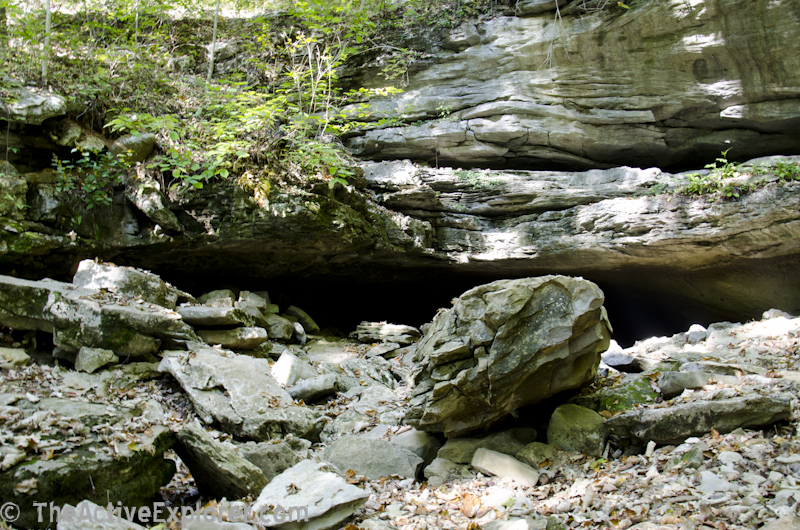 Before the bonfire lighting, I spent a day inside SCCi’s Limrock Blowing Cave with a friend I’d been caving with for a dozen years. My experience was typical of a visit to a SCCi managed cave. The first thing I noticed was the decent parking area and a changing room. Considering the preserve is located in a residential area, these help maintain relations with the neighbors who would otherwise be subjected to visitors parking on the side of the road or dropping to their skivvies while shedding muddy clothes. Also surprising was the lack of trash and vandalism near and inside of the cave. Many caves near a road would be plagued with both, but here I only found a couple of cans.

Inside, I hauled my camera, tripod and emergency gear more than 400 yards on my hands and knees through mud that threatened to suck the gloves right off of my hands. I wondered more than once why in the hell I keep caving, but I remembered why once we reached an underground river with a higher ceiling where I could finally get up off my knees. The water was perfectly clear, small formations hung from the ceiling, and the only sound was a soft gurgle from the passing water. My heavy breathing turned to fog in the constant 52˚F temperature most caves maintain in this region. I plopped my ass onto the muddy bank and relaxed, smelling the fresh mud scent that I’ve come to love. So few people ever see what lies under our feet, and here I was, soaking it all in—literally.

Rested, we waded upstream to where the river widened into a large underground pool. Small reflective survey stakes marked intersections along the way and I made note to ask SCCi about them later. The chilly water soon passed my hips and I knew we were done for the day. My camera gear wasn’t in a waterproof case and I couldn’t risk dunking it all. I shot some pictures while we discussed how to avoid the 400-yard death-crawl back to the entrance.

Recalling that the river flowed toward the cave entrance, we sloshed downstream until we saw a PVC tube hanging high up an embankment to the left. These tubes usually contain a register for cavers to sign and write notes to one another. Taking that as a good sign, we scrambled toward the tube and the large borehole passage behind it. The highlight of the day, a small waterfall flowing from the 70-foot ceiling in a room decorated by stalactites and flowstone (a formation that looks like flowing water), enticed us to pause for a photo op. After I struck a few corny poses by the shower, we finished ducking, crawling and wading out of the cave, picking up the beer cans on the way—the least we could do to help SCCi. 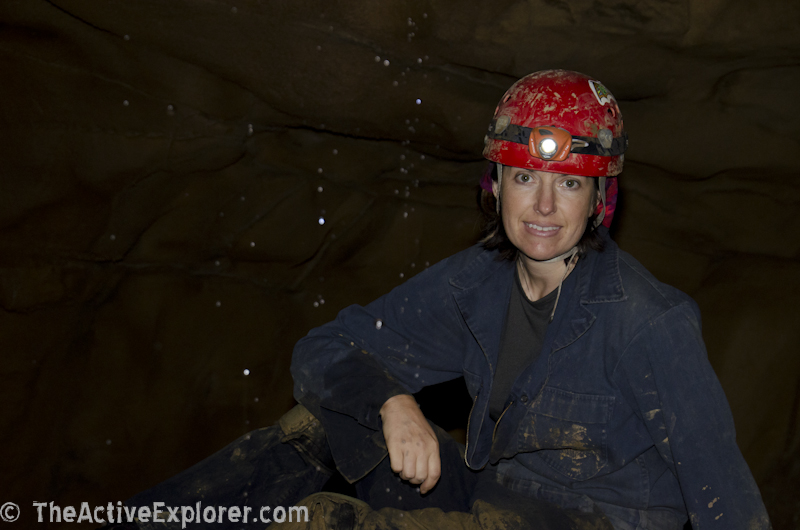 Back at the Cave-In, I talked to the SCCi property manager for Limrock, Tommy Royston, about our trip. He assured me that I had made a good call not wading through the pool because it gets much deeper. He also showed me on a map where they are still finding more cave and surveying as they go. Learning this, I felt a desire to get involved in their efforts to explore the cave further and I renewed my membership with SCCi.

That conversation helped me understand SCCi’s successful relationship with the TAG cavers. Cavers support the SCCi because passionate, dedicated cavers run it. “Twenty years ago when SCCi was founded, there were a lot of nay-sayers,” explained Ron Miller, SCCi treasurer, “they said that cavers were too cheap to support cave conservation. But now we are a model for other conservation organizations such as the Northeastern Cave Conservancy.”

Later, as fire licked over the logs of the bonfire, SCCi volunteers served slices of their 20th anniversary cake to the partying cavers–with a side of beer.

I would like to thank Jennifer Pinkley, Ron Miller, Stephen Pitts and Tommy Royston for taking the time to educate me on SCCi’s conservation philosophy and efforts. This post only scratches the surface of the information they provided and I plan to put it all to use in future articles. To learn more about SCCi and their conservation efforts, visit their website: SCCi.org