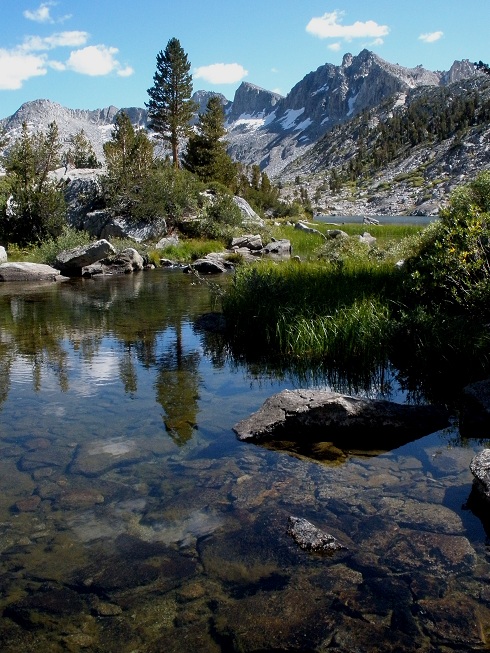 Laura Manina, my sister and fellow backpacker, shares her experiences and tips on backpacking a 57-mile loop to the Evolution Valley. Many thanks to her for this great post and pictures! You can learn more about her travels with her husband, Mitch, on CruisingSailors.com. ~ 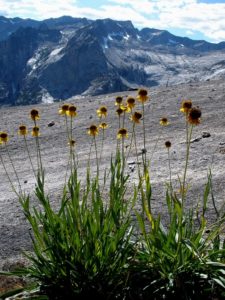 Evolution Valley. First, it was a suggestion, and then it was an item on my Someday List. Now I can say, “beeen there” in a sing-song tone suggesting my best time ever in the land of granite. And it was! The best time ever, I mean. Having driven by this part of the Sierras countless times on Hwy 395, gazing at that saw-toothed range, I always wanted to be the Norman Clyde, the John Muir, the Clarence King who had the privilege of a first ascent or true solitary immersion. Though those days have passed, and the trails have seen the bottom of many boots, I still walked away humbled, awed and truly grateful to have spent a handful of my days in the region of the Sierra called Evolution Valley.

The route my two amigas and I traveled lies in the trio of Kings Canyon National Park, Inyo National Forest and Sierra National Forest. Only a portion of our journey would actually be in Evolution, but the areas we passed through to reach and retreat from our intended destination were just as amazing.

My first suggestion is if you have seven days to make this trip, your body and spirit will thank you. Loitering encouraged! We took four full, plus two half days, to hike the 57-mile route starting at South Lake and ending at North Lake, so 10-12 miles each day was the score. It was a fine pace, but sometimes I just wanted the extra time to really settle into the vistas. Some hike this route from the other direction, north to south. When I walk through this area again, perhaps I will do the same so I can see it from another perspective. I have to say, however, that descending into Le Conte Canyon from Dusy Basin, and not the other way around, seemed like the more fortunate direction for my legs and backside. Ouch!

Day 1:  The first day held an unexpected bonus in that, inadvertently, it turned out to be Get-used-to-less-oxygen Day. By trying to further lighten our loads over and over again, we hit the trail far later than expected, so by necessity had to pitch our tents after only four miles at Saddlerock Lake (11,128 feet). What seemed like an irritating setback at the time, ended up giving us a chance to acclimate a bit before hauling ourselves, and 40 unaccustomed pounds, over Bishop Pass. We found several amazing campsites just off the east side of the trail that held us warm and protected from the wind. 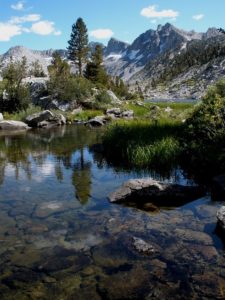 Day 2:   In the morning, we broke camp early and switch-backed up to Bishop Pass. I was breathing so hard I started to suspect my companions might have embraced some trail humor and stashed their heavy items in my pack when I wasn’t looking. Was it this heavy yesterday? Why can’t I breathe? My inner dialogue’s attitude was quickly adjusted when I looked back from whence we came−Mt. Goode, Bishop Lake, Jigsaw Pass. Now I can’t breathe for another reason. Do I really get to be here?

When we finished our descent and arrived at the ranger station in the deep forest of Le Conte Canyon we also reached the junction on which the trail merges with the Pacific Crest Trail(PCT)/ John Muir Trail. This famous combo-trail will be our path for the next 26.5 miles. Though ruled by an evil mosquito king that keeps his troops busy, Big Pete Meadow (the meadow part should have been our clue) was a delight. Hundreds of feet of granite on one side, and beautiful open meadow on the other. A mother deer plus two babies. Slept like a drunken sailor. Perfect!

Day 3:  Today was another “up and over” day. The uphill miles to reach John Muir Pass gave quite a different landscape than we had seen so far. Imagine you’re traveling on a moonscape in the protection of narrow corridors of granite with the imposing presence of two mighty peaks, Langille Peak and Black Giant, in your view. The contradiction lies in the amount of water all around. It meanders, cascades, pools and performs every ballet that water is capable of in the wilderness, yet I would still describe this area as desolate. Beautifully desolate. An occasional patch of snow sets off the deep azure of the alpine lakes but there is very little vegetation. I think this might be a great time to interject that finding water was never, ever a problem.

Once we reached the pass at 11,955 feet, we were gifted with the sight of Muir Hut constructed in 1930 by the Sierra Club, with the intention of sheltering hikers that may find themselves caught in unsavory weather. Inside the hut, I swear I felt intensely connected with the energy of the many hikers who entered tired, cold and grateful. Maybe I was oxygen-starved, but my companions said they were similarly affected. For me, this was one of the most unforgettable moments. Of course, the unforgettable moments started to pile up as we descended into Evolution Basin and then officially into the hanging valley of Evolution. 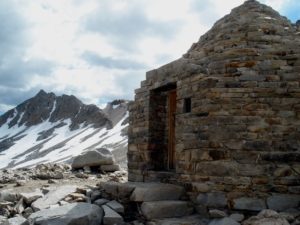 Let’s take a short geography break so I can explain what a hanging valley is: A hanging valley is formed from a side valley, which has a floor at a higher elevation than the main valley floor into which it flows. It often has waterfalls cascading from its outlet because of the abrupt drop off. It happens from glacial erosion that widens and deepens the main valley leaving the geographic feature that seems to float above it. Personally, I simply call it a crazy, beautiful valley with great views. I’m a layman, what can I say?

We slept near the shores of Evolution Lake. The best sites we found are located on the east side of the trail directly after we crossed the stream that feeds the lake. This was fortunate, because I don’t think we could have walked any further even if you told us there was free cold beer around the next bend served by Matthew McConaughey. Well, yeah, maybe then. But the point is we were beat! We camped alone; in fact, we camped alone every night of the trip. Maybe not bathing for three days has its advantages. The next morning we discovered more good sites at the west end of the lake.

Day 4:  Today turned out to be a truly cushy one. We put in about 11.5 miles but it was almost all downhill or level deep-forest hiking. Because of the late snowfall, we were graced with the continued presence of wildflowers, complimented by the beginnings of golden fall, as we skip-trah-lahed our way alongside crashing gorge waterfalls and the calm tracing of the San Joaquin River. Shortly after passing Colby Meadow and reaching McClure Meadow, we were served the best views of The Hermit, a distinctly steep monolith, and Mt. Mendel, which is part of the Evolution range. Okay, I need my camera again. I should just quit messing around and tape the thing to my face. Aside from stellar views, you will also find a station in McClure Meadow that is manned in the summer months by a ranger. 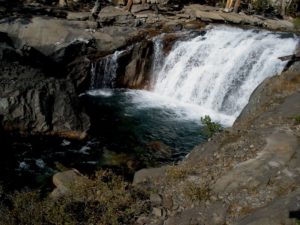 That night we enjoyed a campfire in Aspen Meadow since we were below 10,000 feet and there were already the makings for a fire ready to go! My sincere thanks to the fire fairies who set this up for us. Our simple food choices were holding very well. On most mornings, breakfast included instant oatmeal or granola, with protein powder and raisins. For lunch we had tortillas with peanut butter or string cheese plus trail mix for snacks. Dinners were instant potatoes with packaged salmon or tuna along with instant soup or couscous. We also brought along dark chocolate and tequila for special-treat nights. Notice that when I downsized my load I didn’t ditch the tequila. Call me crazy, but there’s just something great about sitting around a campfire with your friends sharing sugar and a swig.

Day 5: Cushy Day was followed by Payback Day. Us silly girls didn’t expect something for nothing did we? About two miles after leaving camp, we exited off the PCT/John Muir trail and started up to Piute Pass. I recommend an early start because of the exposure in the first 3 miles of Piute Trail. Again, I will say that there is plenty of water the whole way, so drink up. Speaking of water, we regularly forded streams ranging from little hip-hop creeks to put-on-your-water-shoes-and-unbuckle-your-pack soakers! We had it easy in September, but I’ve heard that earlier in the season hikers should be prepared for more difficult fordings. Our payback day ended up being 13 miles, almost all uphill. We started at 8,200 feet and camped at 11,200 feet. Does this seem like a fair deal to you? Me either, until we exited the forest at about 11,000 feet and monster granite views appeared. My girlfriends told me I started singing gospel at that point, but I really think they may be exaggerating. 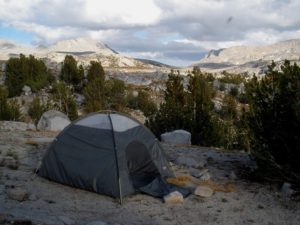 We decided to put in stakes about a mile and a half before Piute Pass on what I considered to be the ‘Best in Show’ campsite winner. To win ‘Best in Show’ our site sported a ledge, floating above a yakkety brook, Mt. Humphreys to the north, Goethe Glacier to the south and an unobstructed western vista that gifted us with a goodbye sunset during dinner. Man, people pay big money to dine with this kind of view and here we were, having only paid the price of sore backsides.

Day 6:   In the morning the sun popped over Piute Pass and we were instantly warmed and reluctant to pack up and head back out into civilization less than 7 miles away. I felt a whining session coming on, “Pleeeeese don’t make me leave.” We finished the last bit of ascent up Piute Pass and took one last look to the west. I said a silent thank you before dropping over the top, then apologized to my knees for the steep, descending switch backs they were about to receive.