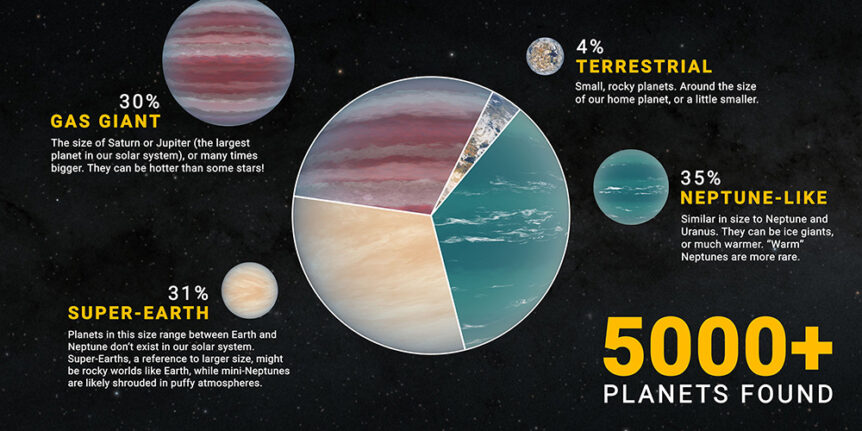 Dubbed a Cosmic Milestone, on March 21 NASA’s planetary odometer confirmed the discovery of 5000 exoplanets existing outside of our solar system. While a significant marker, astronomers believe that the Milky Way Galaxy holds an abundance of additional new, undiscovered worlds, some estimates ranging in the hundreds of billions. From Rocky Worlds and Ocean Planets, to Super Jupiters and Super Earths, some have even been found orbiting dead stars. And as our technology improves, the list of nuances will inevitably grow.

The first confirmed exo-planet discovery occurred in 1992, igniting a scurry (of lenses) into the Cosmos that led us to this moment in time. Since then, several missions specifically geared toward exoplanet hunting launched into orbit, most notably TESS (Transiting Exoplanet Survey Satellite),  which began its mission on April 18, 2018 to survey the entire sky.

While its primary mission concluded on July 4, 2020 reaping some fabulous results, TESS remains in orbit on an extended mission riding the wave of resounding success, increasing the total of new discovered worlds by 205 and priming some 5,488 candidates for follow up investigation by the James Webb Space Telescope.

Webb comes equipped with advanced tools that will analyze the atmospheres of distant exoplanets, capture their light as they orbit their star(s), and identify their chemical compositions, information that could determine an exoplanet’s habitability. And where there’s the building blocks for sustainable living, the possibility for the presence of extraterrestrial life exists.

And while our civilization’s greatest minds achieved tremendous strides within the last decade, further innovations in Cosmic Observations and Exoplanet hunting continue to map the horizon. Around the end of the decade, estimated near 2027 pending inevitable delays, the Nancy Grace Roman Space Telescope will ascend into the stars, aiming to unravel the mysteries surround dark energy and dark matter, and to direct image exoplanets to build upon the expected successes of James Webb.

Afterward, in 2029, the ESA (European Space Agency) mission ARIEL plans its excursion into the stars to observe exoplanet atmospheres, equipped with NASA tech CASE to identify exoplanet clouds and hazes.