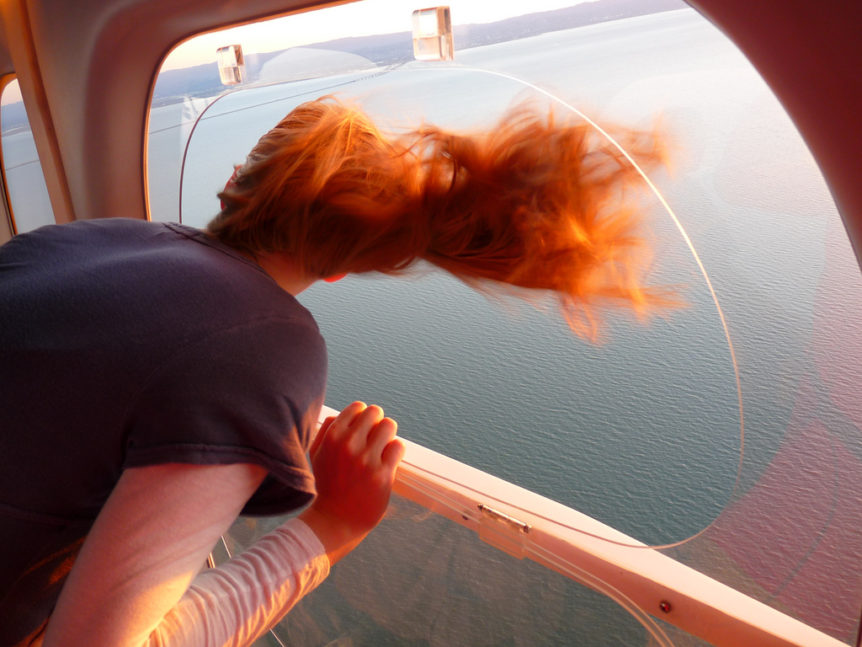 While I’m no Anthony Bourdain, I like to think that I’m somewhat well-traveled. This Valentine’s Day, I’m offering up some of the most breath-taking locales I’ve had the pleasure of viewing from the air. Ditch the roses and chocolates, these are the gifts that will be remembered forever.

If you and your significant other are intrigued by the mysterious anomalies that have popped up throughout human history, the Nazca Lines in Southern Peru will be right up your alley. Hundreds of years ago the indigenous people of the region created gigantic glyphs by digging ditches in the ground—though nobody knows why. Scattered throughout the desert are 1500-year-old, sometimes 200-meter-large sand-drawings of plant and animal figures, only partially-visible from the hills surrounding and from the air above. What could be more romantic than exploring a country’s ancient secrets with your beau or babe?

Zeppelin Ride over Any City

I had a buddy ride a zeppelin over Tokyo a couple of years back, and as soon as he recommended it I rode in a Zeppelin over San Francisco—though unfortunately, it looks like both of those touring companies have shut down since. Still, if you can find zeppelin touring companies that operate over any large cities, book ‘em; floating over a major metropolis, watching the twinkling headlights and streetlamps moving below, was one of the most amazing experiences I’ve had. Imagine sharing that with a loved one on Valentine’s Day. Wow.

Balloon Rides over the Himalayas

For those that want to escape the rumble of the engines and breathe the pure mountain air, a balloon ride over the Himalayan mountain-rage might be just the thing. My experience was short-lived, unfortunately, but nothing has compared to the serenity and calm of drifting silently over the same chain of mountains that houses Everest. A word of caution: make sure that you’re used to the high-mountain climate and elevation before you venture out, or you might end up ruining your own trip with altitude sickness.  Otherwise, grab that special angel in your life and prepare to get the closest you can get to Heaven.

Rainbow over the Himalayas – Photo by Carmen Rodriguez

The Land of Bears

The best saved for last—Kuril Lake in Kamchatka, Russia, is one of those places you always hear about as being renowned for its beauty. I’d heard about it before and it was finally recommended by a female colleague of mine that I visit the old U.S.S.R., and after putting my skepticism aside, I did. Now, I’ve seen some aerial views, but this one? Wow. With lush wetland areas and volcanic activity in the region, it’s safe to say that many folks probably have never seen anything like this before. The reason it’s called “The Land of Bears”, by the way, is because there are roughly over 1,000 bears that inhabit the region. Just flying over I saw a number of them fishing in the lake. Who needs a teddy bear for Valentine’s Day when you can show your partner the real thing?

Take it from a guy who’s gone on a lot of dates in the cockpit of an airplane: on a scale of 1 to Impressive, there isn’t much else out there that can compare to aerial views of beautiful landscapes. Besides, if somebody makes your heart soar, why not get literal with it? Just make sure your adventurous Valentine is not afraid of heights.