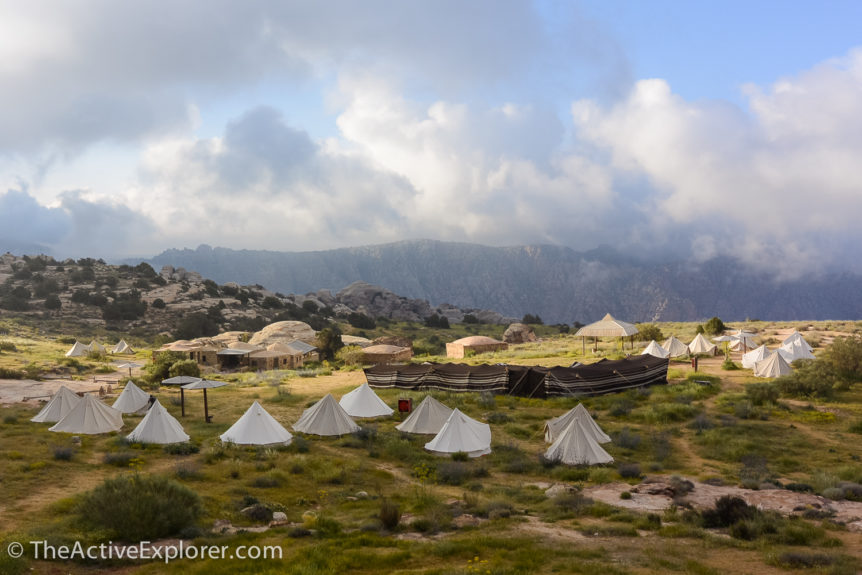 Looking over the tents of Rummana Camp, Jordan

Certainly, travel is more than the seeing of sights; it is a change that goes on, deep and permanent, in the ideas of living. ~ Mary Ritter Beard

Opening my eyes inside the canvas tent, it took me a moment to recollect where I was. It was a disorienting feeling brought on by a combination of deep sleep, a nine hour time change, and thousands of miles of travel to the Kingdom of Jordan. We’d arrived at Rummana Camp after dark following an exhausting day of canyoneering the day before. The night had been chilly, but I’d piled several thick wool blankets on top of myself creating a warm snuggly bed – so cozy I didn’t want to climb out into the cold. I could hear birds and a few tent zippers, so I figured I should get up and see where we were. I’m not sure any description could have prepared me for the sight that waited outside.

Rummana Camp is located on a plateau overlooking the Jordan Rift Valley deep in the Dana Biosphere Reserve. The camp has 20 “teepee” looking tents plus two large Bedouin tents for socializing and tea drinking. It was only four days into our trip and I’d already figured out that Jordanian days revolve around tea. The accommodations were camping with a few extra comforts. The tents had beds which we had to make up ourselves and bathrooms were nearby. Showers were also available, but they didn’t have warm water, so I opted to subject everyone to another day of my stink. Overall, I loved the facility, but I’ve read reviews from people expecting more of a hotel experience who were disappointed. Visit expecting to camp and you won’t find it lacking, especially when you see the view!

Dressing quickly to fend off the chill, I unzipped my tent and stepped outside. Ahead of me were some pretty rock formations and I recall feeling surprised they were right at the edge of camp, yet we hadn’t seen them thanks to the dark…then I turned around. Rugged and knobby formations stepped down from the plateau into the valley. Between the knobs, green and yellow foliage complemented the warm tones of the rock, while morning sun filtered through wispy broken clouds adding dramatic highlights to potions of the landscape. I was awestruck.

This photo doesn’t capture how stunning the view was from above camp.

Quickly I grabbed my camera and climbed one of the rock formations at the edge of camp. After shooting a few photos, I felt a strong need to share the moment with my boyfriend. I texted a photo and then called to describe the beauty in front of me. The world suddenly felt small. From Jordan to the United States, we were sharing a sunrise. (I suppose this is my subtle way of sharing that I’m not traveling solo much these days. Perhaps I’ll share more on that journey later…)

Following breakfast, we hiked near the camp scoring more spectacular views. When I return to Jordan, this camp and the nearby trails are at the top of my list to visit. It is a “don’t miss” destination for outdoor lovers. If you do visit, check on what supplies you need to pack (towels for example). This is a camp, not a hotel. 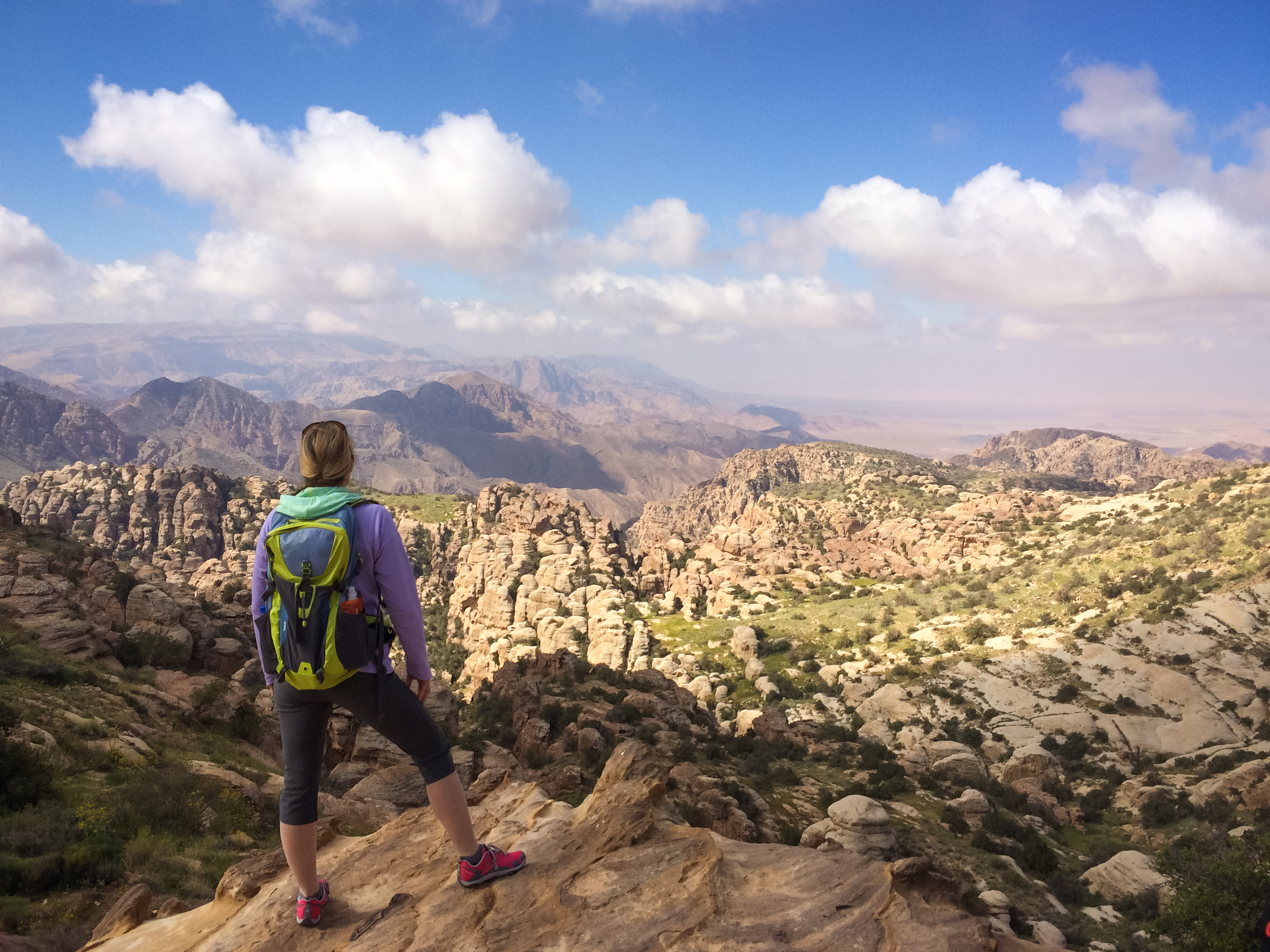 Looking over the Jordan Rift Valley

A few days later, our travels had us camping again deep in the desert of Wadi Rum. That camp, and the surreal landscape surrounding it, pulled me into an emotional space that’s hard to describe. I felt connected to something ancient and simple, freed from the expectations of modern life. While I’m tempted to share my experience camping in Wadi Rum now, I’ll wait. It deserves its own space.

Where is the most exotic place you’ve camped? Did it bring up emotions in addition to being beautiful? Please share in the comments.

The purpose of our trip was to test Columbia Sportswear clothing and gear while being filmed for a documentary. I found a few favorite pieces that I’m using regularly now that I’m home. Two of them are in the photo above:

Shoes: Conspiracy Vapor – A light multi-sport shoe that I wear from CrossFit to trail.

Pants: Back Beauty Capri – I live in these pants both in the gym and on the trail. They have enough structure to resist tears from brush on the trail but are stretchy in all the right spots. Riding to our camp in Wadi Rum